150-180 segment 200-300 segment Bikes HotOuts TVS
June 19, 2016September 18, 2016 twinkletorque 0 Comments
TVS started with the 150 IE Surge engine, moving on to the 160, 160 RTR and 180cc motor with fuel injection,then with new design of ANGEL eye with tagline SCARLY FAST!!
TVS racing is only one company who have its own racing track & school called TVS RACING.this gave life for many racers and all bikes were tested for racing!!. 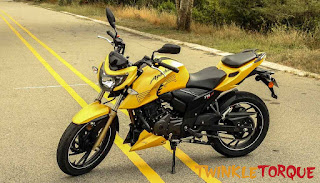 TVS APACHE RTR 200 4V is made from the gene of TVS RACING and it justified its all time tag RTR. TVS Motor has released its more powerful offering in the RTR series of sporty com- commuters.RTR stands for Racing Throttle Response,the name itself says it performance. ya we already know that its brothers are performing well in market, nearly 20,000 sale per year.
Apache is well known for stunts,that shows how it performe!!! Which gave birth to many stunt brands in india.
The Apache 200 4V comes with a brand new engine tuned for everyday riding as well as sporty riding in traffic.This motorcycle is available in both carbureted and fuel injected version. TVS claims the RTR 200 4V will provide nippy handling characteristics due to its lightweight body and frame and will be an ideal traffic filtering tool because of a wider torque curve from its engine.
The RTR 200 were never spotted on the road, as the bike was dispatched in small batches to various states of the country.
NOW!! The TVS Apache RTR 200 4V finally finds its way customers to deliveries.it took more than 5 month to delivery that beast in market.
Everyone wonder that ,why we can’t see a single TVS APACHE RTR 200 4V in cities.
Barely they released in some cities like Bangalore, chennai.where these city are near to thier production plant.its because they have been deliveries to the customers yet!!!.it been more than 5-months since customers booked TVS APACHE RTR 200 4V,but now it arrived many cities likely Maharashtra.But still we all have one question that why TVS took this much of time to delivery the bike.though there is no pinpoint reason for delay,The slow production might be due to TVS having to accommodate not just the RTR 200, but the soon to be launched TVS-BMW G310R(release plan-October) & APACHE/AKULA 300 (they may release in mid-year of 2017 ) ,which will be assembled by TVS at its Hosur plant.
This delay is also likely to affect the roll out of the race breed version of the RTR 200, which will be based on the TVS  X21 DRAKEN concept.The new TVS Apache RTR 200 4V looks distinguished but not dramatically different from the previous generation models.The TVS Apache RTR 200 4V was launche was a high end series of Apache RTR family. As the Apache RTR series has a devoted fan following of its own history, because of its performance and throttle response.However, while the bike seemed quite impressive, aggressive with it’s daytime running light,power,torque from its newly 200cc bored engine.
The TVS Apache RTR 200 4V is available with fuel injected or carbureted engines, and Pirelli tyres in 5 different combinations. An ABS variant is expected to be launched  by end of this year.TVS has always known its customers look for value as much as performance,that it’s price starts from Rs. 88,500-1.07 lakh (ex-showroom, Delhi).**price may with different dealer.
>>For more updates  stay tuned with Twinkle Torque